There is general agreement that the genre of music we call tango originated in the Rioplatense region (Argentina and Uruguay) in the late 1800’s. On this page we present a simple overview to help orient you and accompany the topics we cover in our classes. The subject of tango music is extensive and we invite you to explore in depth. A great resource for further study: todotango

Music in the Milongas

In the Golden Age it was the norm to dance to live music at milongas and today with the revival of tango orchestras you can enjoy dancing to live music regularly at milongas in Buenos Aires and occasionally in other cities around the world. However most of the time music is played by a Tango Dj who knows how to guide the mood and energy to fit the dancers and the venue.

Tandas and Cortinas
Tandas are set of 3-5 songs played generally from the same orchestra and time period with a cortina (a short musical non-tango break) to separate the tandas. The tandas are often organized as follows: Tango – Tango – Vals – Tango – Tango – Milonga. You can read more about customs for dancing in the section on Milonga Etiquette.

The three rhythms in the tango family played during the social dance are Tango, Vals and Milonga.

MILONGA  Milonga is the predecessor to tango and was popular in the 1870s. It was derived from a style of singing known as ‘payada de contrapuntal’ with influences of Habanera and Polka. Milonga is a lively 2/4 tempo with syncopated beat. In contrast to tango the milonga is danced without pauses.

TANGO With the introduction of the bandoneon and lyrical violins the upbeat, rhythmic milonga gave way to a slower and more melodic tango. You can see a breakdown of the evolution of tango music below. While you have a wide variety of tempos in tango music the classic is a 4/4 with variations which allow for dancers to play a lot within the syncopations and pauses.

VALS With many european immigrants living in the rioplantense region it was popular to dance the Waltz in Buenos Aires and Montevideo during the early 1800’s so it is no surprise that the 3/4 tempo was incorporated into popular compositions. What was first called Vals Criollo or Vals cruzado later became known as the Tango Vals. The lighter and faster musicality of Vals lends itself more to turns, rhythmic combinations and less pauses.

When we talk about and practice musicality in our classes we work with the concepts of the beat (golpe/pulso), doubletime and syncopation (contratiempo/sincopa) and the musical phrase which is generally 8 beats. While the measure (compas) is the focal point for the musician we emphasize the phrase when teaching musicality to dancers because we want our movements to flow with the expression of the phrase. These diagrams may be helpful for any tango dancer and especially for those taking our classes. Many people (Santiago included) prefer not to analyze the musicality in this way and with sufficient practice AND LISTENING TO THE MUSIC you can begin to hear and feel the nuances.

You will find that while milonga and vals musicality are slightly more straightforward tango musicality is incredibly open to interpretation and therefore you will find a wide variety of teaching styles. Our approach to musicality has been strongly influenced by the teachings of Gustavo Naveira. 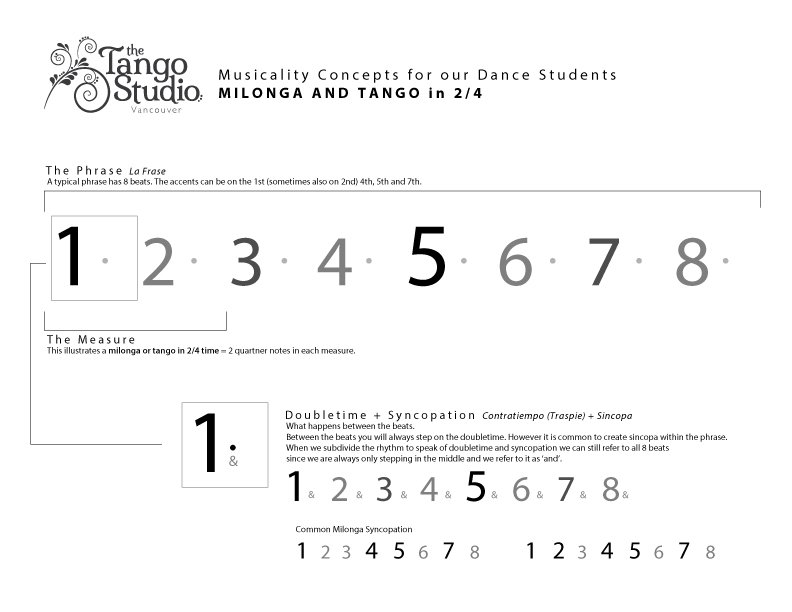 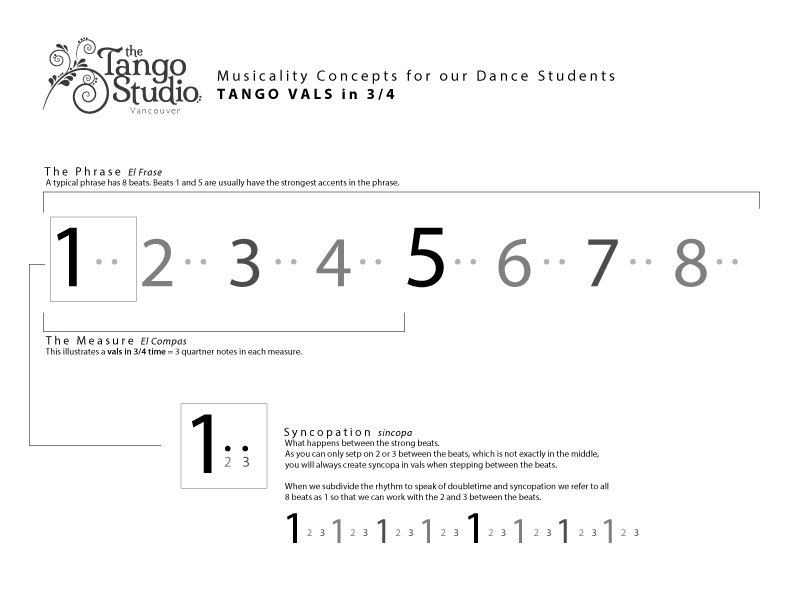 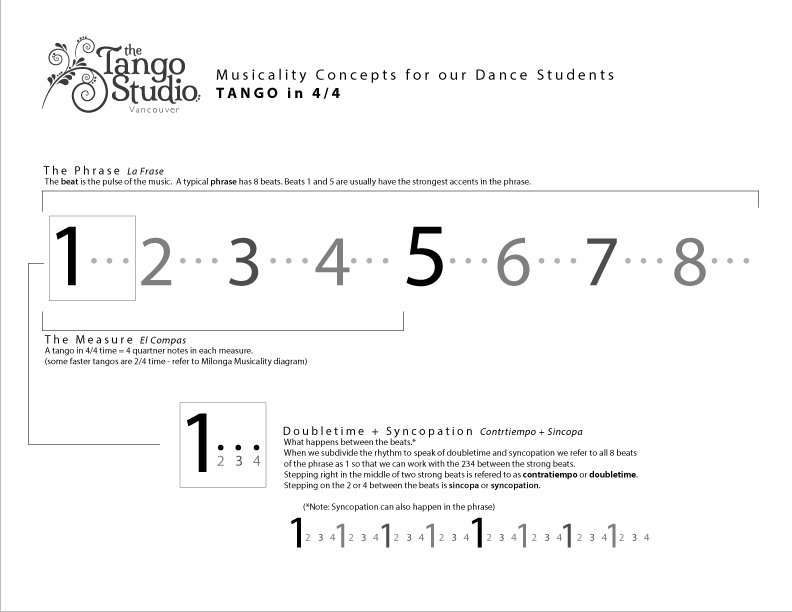 Guardia Vieja  (The Old Guard) 1890 – 1920
The first generation of tangos were born from the habanera blended with African and European music and are sometimes referred to as “tango criollo” or “tango-milonga.” During this early period the structure of tango music was being formed and in the early 1900’s the German made bandoneon was introduced as a key instrument in tango ensembles. Until 1910 tango was only played in cafes, bordellos and conventillos and not accepted by the upperclass. But tango became the craze in Europe around 1910 and then it gained general acceptance in Buenos Aires and Montivideo. This time also saw the creation of the first Orquesta Típica which initially was a sextet consisting of two bandoneons, two violins, a double bass and a piano.

Guardia Nueva  (The New Guard) 1920 – 1935
During this period, the habanera influence began to fade and the tempo of the music slowed down. The music changed into what became known as El Cuarto ‘the four,’ which is four quarter-notes per measure with 2 strong beats (down beats) and 2 weak beats (up beats). In the late 20s and early 30s, more classically trained musicians began to join and form orchestras and were influencing the largely self-taught musicians of the previous generation. Some of the older generation would say things such as “They have turned tango into church music,” because they were working more with melody and harmony than rhythm.

Epoca de Oro (The Golden Age) 1935 – 1955
In the mid-1930s, Juan d’Arienzo exploded onto the scene returning to the driving beat of the Guardia Vieja and the dancer’s loved him filling salons and putting orchestras in high demand! With this intense wave of popularity many orchestras grew and added symphonic instruments. A new partnership was forged between the orchestras and the singers as orchestra leaders figured out a way to incorporate singers without sacrificing rhythm for dancers.

There are hundreds of composers, singers, musicians and band leaders that make up the incredible genre of tango music. These four are the pillars for the social dancer and you will surely hear their music played in every milonga! 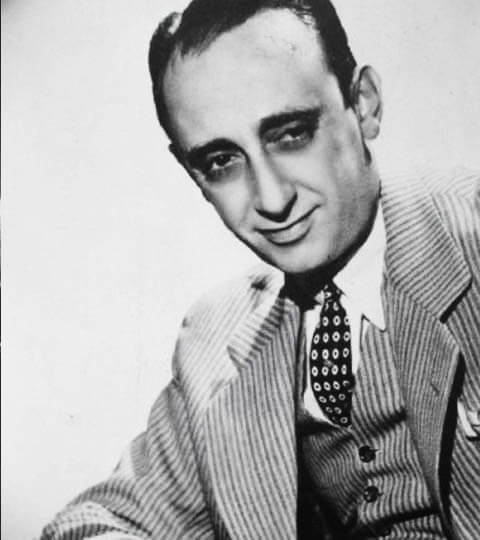 Violinist, Orchestra Director and Composer  1900 – 1976
“Mine was always a tough orchestra, with a very swinging, nervous, vibrant beat!” For D’Arienzo tango has three things: beat, impact and nuances. You can indentify D’Arienzo by his accelerated tempo, his lively style, his sentimental violin, and famous “cuarta cuerda”. He is also recognized for his shining transitions at piano, his unexpected and breathtaking stops and his ending “fortissimo”! 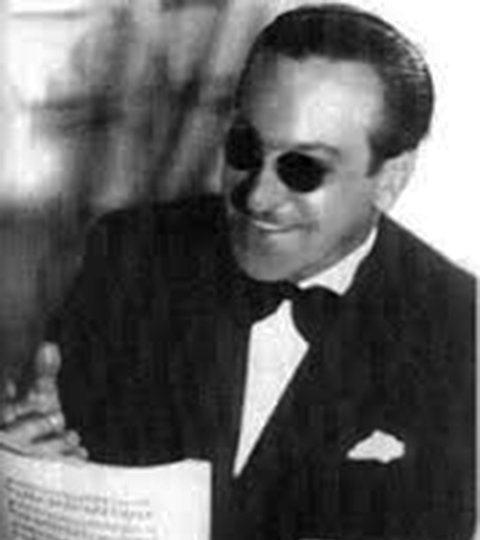 Pianist, Orchestra Director and Composer  1903 – 1960
In the beginning the music of Carlos DiSarli had a simple structure but over time it matured into a more lyrical, richer, playful and more subtle style which remained popular with tango dancers as it continued to have a clear dancing beat. This clean compás made him a favorite of beginning social tango dancers, while more advanced dancers could enjoy the complexity and variations of his melodies. His recordings do not feature significant instrumental solos; the bandoneóns at times carry the melody but essentially play a rhythmical role. Only the violins stand out, playing a short solo or a counterpoint melody. 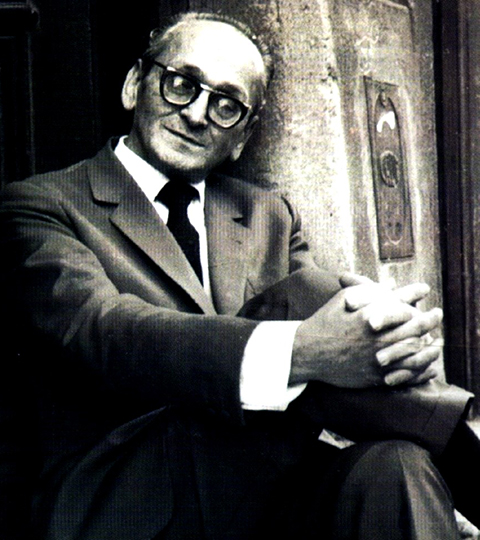 Pianist, Orchestra Director and Composer 1905 – 1995
Pugliese is regarded as the pioneer of syncopation and counterpoint and for having magnificent interpretative musical skills. He developed dramatic arrangements that retained strong elements of the walking beat but also heralded the development of concert-style tango music. Pugliese is a great choice for slower dramatic dancing yet the arrangements can be a bit more rhythmically challenging than those played by other orchestras. He can be identifed by his rich, powerful and passionate style, his sudden changes at all levels – nuances, tempo, pauses, and his typical accents with arrastre (rumba). You can also notice the space given in turn to each instrument, in particular the solos, the use of the rubato and his ending with the whole orchestra, last chord being softer and sometimes a bit late. 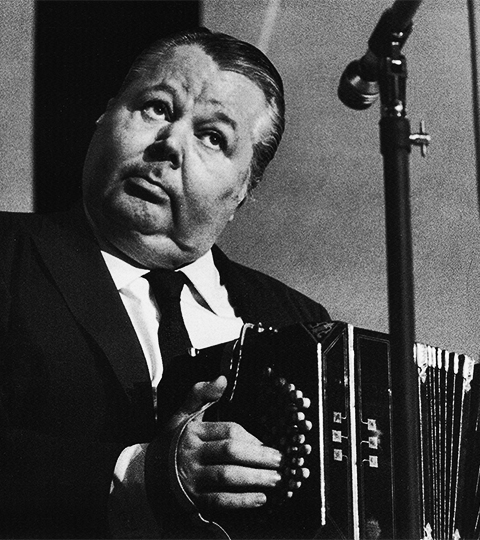 Bandoneon Player, Composer, Arranger and Bandleader 1914 – 1975
As a small child Animal Troilo was mesmerized by the sound of the bandoneon coming from the cafes. He persuaded his mother to buy one for him when he was 10 and he played almost his whole life with that same bandoneon. Troilo and the bandoneón became one. He played with complete emotion. He personified the very essence of tango and he became known for ‘The Troilo Sound’ – a very rich and distinctive sound that juxtaposed staccato and legato figures. Troilo hired the very best musicians of his day and his Orquesta Tipica was the favorite of dancers during the Golden Age of tango. 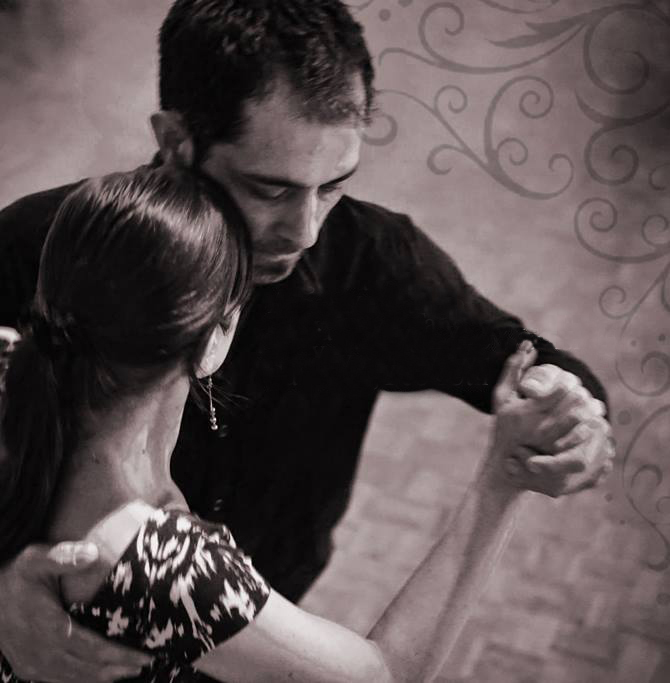